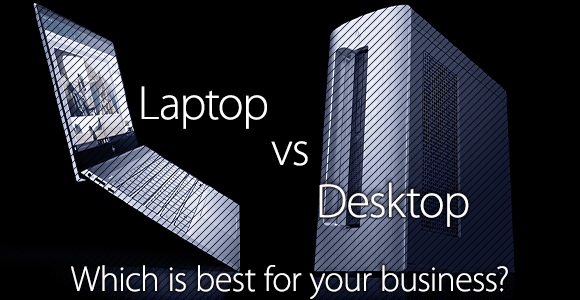 Portability: This one is pretty easy: Laptops are the obvious choice if you need to bring your computer anywhere. Having the keyboard, mouse, monitor, and computer in one easy-to-carry package is certainly easier to lug than a desktop computer, a bunch of cables, monitor, etc… .

Future-Proofing: For the most part, laptop computers can only have certain parts upgraded. Unless you have a high-end (read: expensive) workstation or gaming laptop, you can generally only upgrade the RAM and hard drive. Desktops, on the other hand, are much easier to upgrade should the need arise. RAM, graphics, hard drives, and even processors can be fairly easily swapped out, expanded upon, or tweaked.

Repairability: Similar to the future proofing point above, desktops are easier to work on and to fix or repair. That being said, business-grade laptops are built to be fixed/repaired by certified field techs, so they’re not bad to take apart, either. But getting parts for them can be tricky if they’re not under warranty (and, honestly, if a computer isn’t under warranty, it’s generally not worth repairing).

Performance: Desktops have traditionally had the edge here, but the gap is getting closer. But they’ll sacrifice power consumption and portability to get that higher performance. Because you can get higher-end components in a desktop computer, the performance will always be better, dollar-for-dollar.

Physical Security: Laptops and desktops, since they both run the same operating system, can be configured roughly the same from a software security standpoint. From a physical security standpoint, however, laptops are obviously going to be easier to walk off with (which is why full disk encryption is a requirement, especially in regulated environments). Most business-grade laptops (and even desktops, for that matter) have a little slot of them that can be used to physically secure the laptop or desktop with a lock and cable. They’re usually referred to as Kensington lock slots, and they make special locks and cables (including special cables for newer Dell laptops and Surface Pro devices) and desk anchors to keep them physically secure.

Price: While the gap is closing, you will spend less money (even if you include the cost of the monitor) for a functionality and performance-equivalent desktop compared to an equal laptop. But, depending on your needs, the extra cost might be worth it to get the advantages that come with a laptop.

Interested in getting a computer (desktop or laptop) for your office? Contact us today and we can help you figure out what you need, or follow some of the guidelines in our computer shopping advice.