How Server Virtualization Can Help Your Business 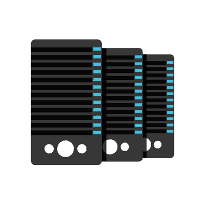 While many of our clients have single-server environments, some of them have the need for 20 or more servers for a variety of reasons. Gone are the days where you need 20 physical computers for your environment – virtualization of server resources will save your company money and improve disaster recovery and productivity.

Before we go into the benefits of virtualization for your business, we need to discuss what virtualization actually is. In the not-too-distant past, if you needed another server outside of your main domain controller and file server (say a mail server or a server for a specific application), you had to buy another physical box. Virtualization allows you to run more than one server as virtual machines on a single piece of hardware. So instead of running two more more physical servers, you can run a single physical server that is running two or more virtual servers.

Since servers are rarely running full load, this allows that available power to be spread out and used.

As you can see immediately, there are a few obvious benefits of this type of setup:

However, there are other benefits that may not be quite as obvious:

Interested in talking more with somebody about server consolidation and virtualization? Call one of our solution consultants today to discuss an assessment to discover the best solution for your environment.