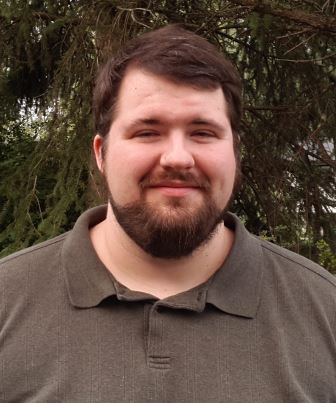 Our teamwork is one of our company’s Core Values (ask any of us and we’ll tell you the rest of them). We’re only as good as our team. We would like to give you a chance to meet a team member periodically. This month, we’d like to feature a team member that travelled a long way to get to Weston — Kansas to Anchorage. Read on to meet Dylan Brooks, Network Consultant in our Anchorage, Alaska, office.

Name and title: Dylan Brooks, Network Consultant. I’m a guy in the Anchorage office that makes sure all the computers up north work the way they’re supposed to.

Hometown and how did you end up in Anchorage? I’m from Lawrence, Kansas. I ended up in Anchorage after my spouse graduated and got a professorship at UAA, so we moved up here in July of 2013.

How did you end up at Weston? I looked for jobs online in Anchorage, and found a listing for a job that sounded like it fit my skills well. I applied and got it – it’s actually the only job I applied for up here, and I got it before I moved. It’s worked out well for me and I love the folks here.

Favorite part about Weston? The Weston crew is a fun and helpful bunch, which makes working here enjoyable.

What do you do for fun in your spare time? I play a lot of games – video games, board games, tabletop games. I also do some writing and walk my dog. I read less than I used to, though I listen to a fair number of audiobooks and podcasts.

What is the geekiest thing you do in your spare time? I get pretty geeky. I’d say it was probably the miniature wargames I play and occasionally paint (poorly).

If you could witness any event past, present or future, what would it be? The future looks like it’s going to be pretty amazing. I’d like to see the invention of the first artificial intelligence (if that ends up being possible).

What chore do you absolutely hate doing? As Veronica can attest, I don’t like vacuuming or dusting very much.

If you could meet anyone, living or dead, who would you meet? Tough one. Either Terry Pratchett or Carl Sagan.

What do you want to be when you grow up? I’d like to be a writer or game designer.

If you could have any one superpower, which would you choose? Shapeshifting is a good one. You can get a lot of stuff out of that one power.

What’s the craziest thing you’ve ever done in your life? Moving to Anchorage has been pretty crazy, but I’m glad I did it. Getting out of my hometown has been a nice change, after never living very far from it before.

If you woke up tomorrow as an animal, what animal would you choose to be and why? Nah, man, I’ve read Kafka. I’m pretty happy with this upright ape-descendant body I have. If it was temporary, something like an eagle or hawk might be interesting. Or a cat – cats have a pretty good gig.

What is the worst pet you have ever had? My current cat, Simon, is pretty terrible. He pretty much just moves to stay in the sun as the sunny spot moves across the floor. He also doesn’t hunt, though he does spend a fair amount of his day staring at the magpies and ravens outside – which would totally eat him if we let him out. Also, he bites.

How do you get your caffeine? We have a fancy coffee machine here at the office that grinds the beans and everything. If I’m ever on the phone with you and you hear a sound like someone threw gravel in a blender, it’s the coffee machine.

What’s the strangest talent you have? I frighten computers into not reproducing errors in my presence. This is actually annoying – makes it hard to figure out what’s going wrong if it works fine when I’m around.

Where’s Waldo? Waldo exists in a state of quantum superposition. So, partially everywhere, until you see him, and then he’s just in that one spot. Behind the guy with the umbrella.

If I opened your fridge, what would I see? Today? A ridiculous pile of stuff, since we went to the store yesterday. Lots of fruit. Several bottles of wine, and a large bottle of Irish cream. Two dozen hard-boiled eggs.