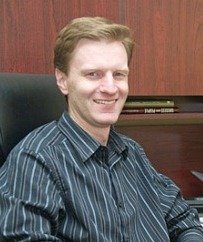 We’re only as good as our team. Our teamwork is one of our company’s Core Values (ask any of us and we’ll tell you the rest of them — someday one of you out there will take us up on this). Every month we’d like to introduce you to another member of our awesome team. So far you’ve met Jeff, Dylan, and Rebecca. This month, we’re introducing you to the utility player (and ever-so-humble blog/newsletter editor at Weston): meet Jake Ortman.

Name, and title and (to quote Office Space) “What would you say you do here?”: Jake Ortman, Communications Manager. I do a bit of everything at Weston from parts sales, vendor relations, web development, marketing, newsletter/blog writing, SEO, event planning, contract reconciliation, administration, service work and more.

Hometown and how did you end up where you are? I was born and raised in Bend, Oregon, and other than stints in Fort Collins, Colorado and Eugene, Oregon for college, I’ve lived here my entire life.

How did you end up at Weston? Prior to Weston, I spent many years in the media and tourism industries, working in a variety of roles, both technical and non-technical. After making the commute to Sunriver from Bend for 10 slippery winters (and causing my family to panic a little every day), I was looking for a change to a more tech-focused company that didn’t require me to drive that stretch of highway as often. A few years ago I answered a craigslist ad, had lunch with the folks here, and was hired for a dispatcher and service manager position with Weston. Earlier this year I moved into the position I’m currently in.

Favorite part about Weston? The people here are great. I’ve yet to meet a more customer-focused bunch of folks anywhere. And they’re all incredibly smart and fun people.

What do you do for fun in your spare time? I’m a music guy, but not in your typical sense: I’m a classical music guy and have a musical family. My wife plays piano and trombone, my oldest daughter violin, my youngest daughter cello and piano, and I’m a percussionist. We’re all involved with local performing groups (including but not limited to the Central Oregon Symphony, Cascade Windows Symphonic Band, High Desert Chamber Music and Central Oregon Youth Orchestra) either as volunteers, coaches, or performers. Which reminds me, I have rehearsal tonight.

What do in your spare time that nobody would guess? I’m a track and field and distance racing fan more than any sport out there. Most people will start their day reading the local news, while I’m checking the results of races and reading the headlines from the various track and field and running news sites and blogs. I ran competitively in high school and college and while I don’t compete like I used to, I still love the sport. I try to make it over to Eugene at least once a year for a track meet, as there is not a better place to watch a track meet than Hayward field.

If you could witness any event past, present or future, what would it be? While this question could be answered so many different ways, and there are so many amazing things that I would love to have seen (the fall of the Berlin Wall, the first moon landing, Martin Luther King Jr.’s famous speech, the Wright Brother’s first flight, among many others), I think because it’s the 60th Anniversary of its occurrence, I would have loved to seen Roger Bannister become the first person to run a sub-four-minute mile.

What chore do you absolutely hate doing? Isn’t that why they call them “Chores?” Because they’re a chore to do? I can’t say that I’m a fan of doing chores in general, but I can’t say that I hate doing any of them. They just have to get done. If I had to say “Hate” on something, I’d say anything to do with plumbing in our house (like our last fiasco, which was no fun at all). I also hate hand-writing anything (forms, etc…). I’m one of those type of folks who will find a way — even if it takes three times as long — to digitally fill out something. Scanning in a document, overlaying the PDF in Indesign/Photoshop, re-printing, etc… . Yes, it’s a lot of work, but it sure beats filled out those forms by hand. Anybody who’s seen my cruddy handwriting would probably say it’s a good thing I put forth the effort.

If you had to pick one word to describe yourself, what would it be? Loud. My voice is one of those that no matter what I do, it just carries. I blame my dad, who’s the same way.

If you could meet anyone, living or dead, who would you meet? Both my grandfathers. One died when I was very young and didn’t really get to know him, the other was a Pearl Harbor survivor and passed away when I was a teenager. Both of them probably had a lot of stories to tell, but I didn’t get a chance to hear nearly enough of them.

Choose a movie title for the story of your life. The NeverEnding Story.

If there was a movie produced about your life, who would play you and why? I’ve been told if I comb my hair right that I could pass as Conan O’Brien but I sound like Tom Brokaw. So if we could somehow merge that together …

What do you want to be when you grow up? Still waiting to figure that one out. I wanted to be a nutritionist when I was first in college. Then I realized you had to take Organic Chemistry and I dropped that idea in a hurry. I had ambitions of being a tech journalist, but job prospects were pretty slim at the time, and I was married with a young daughter to feed — so I went into real-world tech instead.

If you could have any one superpower, which would you choose? Invisibility. Though you need to be careful you don’t stain your clothes.

What’s the craziest thing you’ve ever done in your life? When I was in middle or high school (either 8th or 9th grade, I can’t remember), I rode my bike a ton, even did few road bike races. I borrowed a buddy’s ultra fancy road racing bike to see how fast we could make it go. I put the largest chainring I could find on it (I think it was a 58 tooth), rode up to Mount Bachelor Ski Resort parking lot from Bend, turned around and pressed it as hard as I could on the decent towards Bend. The speedometer on the bike topped off at 60MPH, I was still accelerating and actually passed a car on the highway. After that, I figured I should probably slow down. Looking back, how I managed to think that was a good idea with my meager bike racing experience is beyond me, and I was very lucky to come out of that unscathed.

If you woke up tomorrow as an animal, what animal would you choose to be and why? I’ve always thought birds were cool, and large birds that can circumnavigate the globe are amazing to me. So for me, I’d love to be an Albatross.

What is the worst pet you have ever had? We got a hamster for the kids, and the thing was the most unsocial thing I’ve ever seen. It was nice and cute in the pet store, and then when we got it home it just buried itself and only came out at night. I think in all the years we had it, we saw it a grand total of 15 minutes.

How do you get your caffeine? Pepsi or Dr Pepper. I need my caffeine (don’t we all?), but can’t stand coffee. I’m usually the guy in the office carrying around a soda while everybody else has a coffee mug.

If you were on an island and could only bring three things, what would you bring? If we’re just talking to survive, I’d bring my Leatherman, a tarp and a volleyball.

Where’s Waldo? Not sure, but I know a way to find him.

If I opened your fridge, what would I see? Not a whole lot at the moment. Pay day was just a few days ago, and we haven’t made a grocery store run. Milk and condiments, mostly. And some random Tupperware in the back of the fridge that I’m afraid to open.