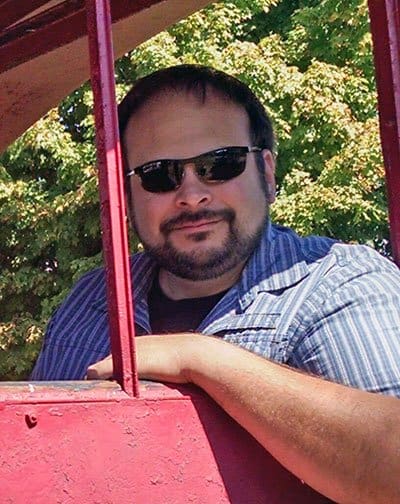 We’re only as good as our team. Our teamwork is one of our company’s Core Values (ask any of us and we’ll tell you the rest of them). Whenever we hire a new team member, we’d like to introduce you to them (as you’ve already met the rest of our team). So far you’ve met a bunch of great folks. This month, we introduce Weston’s newest team member, Stephan Albers.

Hometown and how did you end up where you are? Warren, Michigan (suburb of Detroit). I’ve wanted to live in the Pacific Northwest ever since I first visited years ago. I visited Bend about four years ago and thought how awesome it would be to live here. I figured I’d never have the opportunity to actually move this way, but here I am.

How did you end up at Weston? I wandered in when no one was looking, found a desk and started working.

Favorite part about Weston? The team members are great, the company values its employees and its clients.  We all work to bring out the best in all of us.

What do you do for fun in your spare time? Mess with computers and networking equipment, fly drones, play my guitar, go camping, hiking, backpacking, target shooting, sit on my back porch with a hot cup of tea, study history and philosophy, read Wikipedia (yes, I know that’s a bit weird).

What do in your spare time that nobody would guess? Probably my Wikipedia/history/philosophy habit.  It usually surprises people when we’re talking about something and I find a tie in to the Battle of Ad Decimum where General Belisarius defeated Gelimer, King of the Vandals or some other random analogy or fact.

If you could witness any event past, present or future, what would it be? The creation of the world

What chore do you absolutely hate doing? Dishes.  I loath washing the dishes.

If you had to pick one word to describe yourself, what would it be? Blessed.

If you could meet anyone, living or dead, who would you meet? Whoever figured out that that you could make a great beverage from the tea plant.

Choose a movie title for the story of your life. Epic (Editor’s Note: It’s already been done)

If there was a movie produced about your life, who would play you and why? I will star in my own autobiographical movie.

What do you want to be when you grow up? Retired and traveling the world.

If you could have any one superpower, which would you choose? To bring peace.

What’s the craziest thing you’ve ever done in your life? Ate some raw food in a foreign country with a broken down health system in the midst of a widespread cholera epidemic.

If you could trade places with any other person for a week, famous or not, living or dead, real or fictional, with whom would it be? A wilderness guide.


If you woke up tomorrow as an animal, what animal would you choose to be and why? A duck-billed platypus.  It’s an animal that looks a bit like several different animals.  Similarly, my interests and abilities vary widely.

What is the worst pet you have ever had? A cat.  Yes, I have a cat.  Yes, I love my cat. However, a dog is man’s best friend.  A cat is man’s weird reclusive roommate that poops in a box.

How do you get your caffeine? Tea (Editor’s Note: Stephan has a slight obsession with the stuff, as evidence by his large collection of high-end tea tins and bags stacked up around his desk. He swears it’s all tea and not something else.)

What’s the strangest talent you have? If I had a ridiculously strange talent, I’d be working in Vegas making my millions.

If you were on an island and could only bring three things, what would you bring? A gassed up generator, TV/DVD set and all the episodes of Survivorman.

A penguin walks through that door right now wearing a sombrero. What does he say and why is he here? Hola Paco. Que tal? He’s a salesman selling Jeremiah Peabody’s polyunsaturated, quick dissolving, fast-acting, pleasant tasting, green and purple pills.  It’s a cure all that gets rid of all ailments.

If I opened your fridge, what would I see? Some leftovers that have been in there so long that they’ve gained sentience.  They growl at you, “Close the door!

Here’s $20. What are you going to do with it? I build a time machine and travel back in time 100 years and invest it.  I’ll be a millionaire when I return to the present and cash in.