HomeBlogIs Your Computer On Its Last Legs?

Is Your Computer On Its Last Legs? 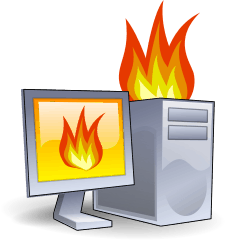 We are firm believers that a properly-configured computer with a factory warranty should last you at minimum three years, usually longer (which is why most of the computers we sell come with at least a four-year warranty). But sometimes a computer is on the verge of death. How can you tell when your computer needs to be replaced?

No Matter What, Backup First: You should be running backups of your critical systems already. However, you may not be backing up your computer’s data, other than maybe your My Documents and/or Desktop which are server-redirected. Since you can never have too many backups, make sure you have a backup of the system you’re concerned about and do it right away.

Meanwhile, here are some of the signs that things could be potential going bad for you:

Loud Noises: Many times, when a computer starts getting louder than usual, it means something is wrong. For example, it could mean a part is starting to fail (usually fans or hard drives, which are really the only remaining moving parts in a computer), or a process is sucking up all the processor power in a system (causing the processor to heat up and spin up the fans). With SSDs, there aren’t any moving parts, so you won’t hear noise there, but there are very few fanless PCs out there, so things can and will still make noise if things are going south.

Malfunctioning or Failing Hardware: Modern computers (especially business-grade computers) are pretty good about telling you when something isn’t quite right with the system and have built-in diagnostic checks you can run that will show you if hardware is failing. That being said, sometimes those tests don’t tell you everything, and sometimes random system errors, crashes, or shutdowns point to something else that diagnostics didn’t pick up. Or sometimes it’s very obvious like there’s a line down the middle of your screen or the keyboard or touch pad isn’t work right.

Constant Software Problems: If you are experiencing issues with multiple programs – crashing, glitching, freezing, etc… – and it’s not just a singular program, something could be amiss. If even after rebooting, things are still in bad shape, you could have a computer or a component in your system that needs to be replaced or not built to adequately handle what you’re throwing at it. Yes, it could be a system-wide software problem, but if things are still wonky after a Windows reinstall, then you likely have hardware that’s causing it.

Sudden Sluggish Performance: While there are many reasons a computer could be slow (most common being that the computer wasn’t sized properly for the workload you’re putting on it), if performance issues come on suddenly with no other changes to the system, software, or workload, there could be a hardware issue, full hard drive, or other similar issues that could be causing it.

Worried about your computer’s performance? Call our team and discuss a CompleteCare managed IT support agreement. We watch over this type of thing and frequently are alerted of problems before you even notice they’re an issue.