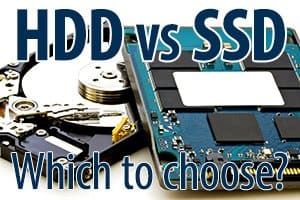 If you’re shopping for a computer (be sure to follow our computer shopping tips), you may have seen the term “Solid-State-Drive” or “SSD” on the computer’s specification sheet. What is a SSD and why should you get one in your computer instead of a hard-disk-drive (HDD) for your data storage needs?

First off, let’s look at what each of these technologies are.

Hard Disk Drives (HDD): HDDs have been around since the 1950s and up until a few years ago, computers almost wholly used traditional mechanical hard drives. HDDs use magnets to store your data on rotating platters. The heads that read the data float just above the platters. The faster the platters spin, the faster the hard drive performs. Laptop drives typically spin at 5400 RPM (revolutions per minute), desktop hard drives at 7200 RPM, and some server-grade hard drives can spin at 10,000 RPM or 15,000 RPM.

Solid State Drive (SSD): You’re probably familiar with USB thumbdrives or USB sticks as they’re sometimes referred to. If you’ve ever used one, you’ve basically used similar technology as a SSD. SSDs use a type of non-volatile memory that won’t forget what’s stored on it if it loses power (like a RAM chip in your computer would, for example). There are no moving parts in SSDs and SSDs have a bunch of chips on there to store data with all read/writes going through the drive’s controller (basically the drive’s brain) to store and retrieve data from the various chips.

Pros of HDD: Since the technology is very mature, the capacities available for HDDs are generally much larger and cheaper than SSDs. You can buy a 4 terabyte (4TB) 5400 RPM desktop computer drive for around $120 and or a 7200 RPM drive for $200. A 4 terabyte SSD on the other hand will run you about $1600.

Pros of SSDs: Because there are no moving parts, the speeds of SSDs are significantly faster than traditional hard drives (can be up to 400% faster, depending on the drive). Considering how often your computer is accessing data from your drives, the speed difference of SSDs speeds up file access, program launch, boot up and general usability significantly. They also don’t have any moving parts, so they generally use less power and produce less heat than a HDD, giving your laptop more battery life.

Which technology should you use? Unless storage needs demand it, you should always pay the extra price to go for solid-state-drives because of the additional speed. For years, hard drives have been the bottleneck in system performance with constantly improving processor, RAM and graphics performance improvements. SSDs make the computer feel snappy, which is something that always feels nice. If you do need the capacity of a traditional hard drive, consider using two drives – SSD for your boot and programs drive and a secondary hard drive for data storage. That will allow you to have most of the benefits of the SSD with the extra capacity of a traditional hard drive.

Interested in purchasing a computer for your business and seeing how SSD technology can improve productivity and performance? Contact our sales team today at sales@weston-tech.com.