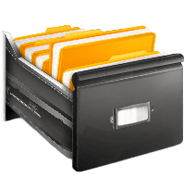 We recently discussed modems, firewalls, and routers and now we discuss something that has been a part of Microsoft operating systems long before Windows event existed: File Extensions.

Put simply, file extension is the suffix at the end of a filename (after the period) on Windows that distinguishes what program Windows should use to open the file. For example, “picture.jpg”. JPG is the file extension and Windows assumes it is a JPG Image file. When you double-click on it, it will likely open up in Windows Picture viewer (we prefer Irfanview, but we digress). A file named “Financials.xlsx” is an Excel-spreadsheet, “Notes.txt” is a text file that will likely open in Notepad, etc… .

You can change the programs that are associated with each extension by changing the default file associations. You can follow the directions for Windows 7 and Windows 10.

There are thousands of different file extensions and they control what program will open the file when double-clicked upon. You could even rename “picture.jpg” to “picture.txt” and Notepad would attempt to open it. It would be gibberish, but it would work.

The trick is that file extensions are generally invisible in Windows, so you’ll see “Financials” with an Excel icon instead of “Financials.xlsx.” Microsoft has directions on changing that in the folder settings to make it so file extensions are visible (basically going into the folder view settings and tweaking there). This gives you more control and visibility to the actual file type to you can avoid potentially dangerous files (like Macro-enabled Office documents or these 50 potentially dangerous file types).