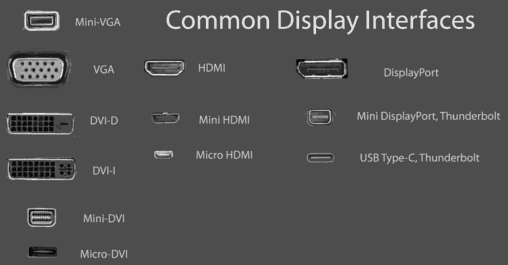 I’ll be honest: I was once a single-monitor user and thought it was fine. I carried my laptop wherever I went and worked like that. That’s the way it was, and I liked it. However, once I went to a multiple monitor setup, I was hooked, and I never looked back.

While I was pretty productive before, I didn’t realize the gains that could be had by having more than one monitor and being able to expand my desktop to fill all of them. While the jury is still out whether more than two monitors make you more productive, having at least two monitors can allow you to easily view and work on multiple documents and programs without having to constantly switch back and forth. Having them both in view makes things work much smoother.

Everybody in our office has at least two monitors, most folks have three, some folks wish they had four or five. We couldn’t imagine using a single monitor.

How do you get a multiple-monitor setup? First off, before you go out and buy a bunch of monitors, you need to make sure your computer can support it. Thankfully, most modern business-grade computers will support at least two monitors or more (modern Dell Optiplex systems support at least two, sometimes three or four, depending on their configuration). The easiest way to see is to look at the back of your PC: How many graphic ports (DisplayPort, HDMI, DVI or VGA connections – they look like this) do you see? Here are the various connections you might see:

Higher-end machines may have DisplayPort connections that at allow you to daisy-chain monitors off of one connection, which greatly simplifies things and cleans up the cabling. However, that requires a computer and graphics card that support DisplayPort 1.2 MST it as well as monitors that support that type of connection – and that isn’t super common. You can read more about the technology behind that here.

You may also find that you don’t have enough monitor connections for your goals. Contact us, as you can add graphics cards to desktop systems and docks to laptops that will allow more monitors to be connected. We can come up with a quote/plan to get you additional monitors (we have configured computers for six monitors fairly easily).

So now that you’ve figured out how many monitors you can connect, you need to acquire some monitors. You may already monitors sitting around your office. If that’s the case, but you find that the connections on the monitor don’t match the connections on the computer (very common if you’re using an older/cheaper monitor with a newer PC), don’t fret: there is usually a $20-30 adapter that can convert your computer connections into something that will connect to your monitor (contact us for details). Generally speaking, you want to get monitors that are roughly the same size and same resolution (ideally same make/model so the color matches).

Now that you’ve made all the connections, have your monitors and computer all fired up (connect everything when things are shut off, just to make sure detection happens properly), you’ll need to setup Windows to span the desktop across all monitors (generally speaking, they’ll just mirror things when you first setup things so you’ll see displays with the exact same thing on it). To do that, right-click on your Windows desktop and select “Screen Resolution.” You’ll see the monitors that Windows has detected. There should be a button to “Identify” the monitors to show you the numbers that Windows has assigned them. You can (and should) then arrange the monitor icons on the screen to match your physical desktop setup as well as change the primary monitor, if necessary, to match the screen that’s right in front of you. Then, for each of your monitors, select the “Extend Desktop to this Display” under the “Multiple Displays” option. Hit apply. Things will jump around a bit on your desktop, so you may need to arrange things a bit (icons, etc…), but once you get things how you like, they’ll generally stay that way.

So how do you use multiple-monitors? For me, I’ll generally have our ticketing system on one screen, Outlook, Skype and our RingCentral usage monitor on another, and anything I’m presently working on the screen in front of me: 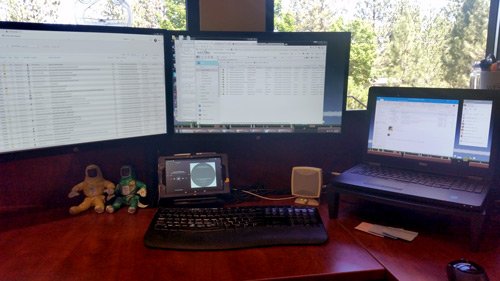 With the “Windows-Key + Shift + Left/Right Arrow” shortcut, I can throw application windows between monitors quickly and easily.

My desktop arrangement also includes a fourth screen that you might see: The all-important Pandora/Spotify/Plex music streaming tablet.

However, my three monitor setup is pretty tame compared to this obscene 24-monitor setup (a day-trader setup where the user is likely only interacting with a few of the monitors at once and the rest are for monitoring): 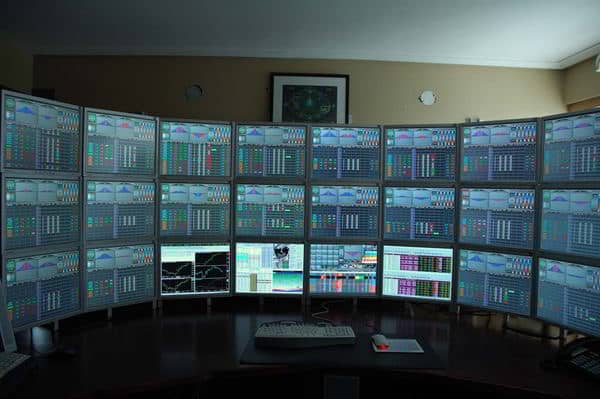 Interested in expanding your desktop horizons and seeing how much more productive you can be with more monitors? Contact us today.