HomeBlogThunderbolt vs USB 3.1 using USB-C – How Does It All Work?

Thunderbolt vs USB 3.1 using USB-C – How Does It All Work?

More and more new computers are starting to include USB-C Ports, which are great (even if they have a few quirks to watch out for). If you’ve used a Mac or some older PCs, you might be familiar with older Thunderbolt ports that share a port type with Mini DisplayPort, leading to competing ports that did very similar things. Now with Thunderbolt 3, USB 3 and Thunderbolt are going to be using the same physical port: USB-C. Now that two technologies are sharing the same connector, there are a few things to watch out for to keep your self out of trouble.

Long story short, USB-C basically describes the shape of the connector. Thunderbolt 3 brings Thunderbolt to USB-C, no longer requiring funky adapters or converters to get everything working right.

Like we said in our previous article, you need to be careful if you have USB-C ports on your computer and the functionality they provide. Thunderbolt support requires an additional chipset on the computer’s motherboard, and most cheaper computers aren’t going to bother with the extra expense. Just because you see a USB-C port on your computer, it may not be Thunderbolt capable (it most likely isn’t – USB 3.1 protocol-based parts are far more common).

How Can I Tell What Capabilities I Have? In theory, the USB-C port should be labeled with its capabilities. Click on the graphic below from Intel that explains what the various icons mean: 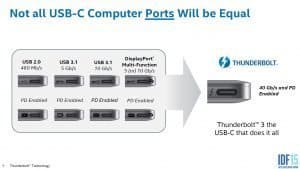 A USB-C Port could be doing a multitude of things.

These labels aren’t always used consistently, however, so make sure you verify with your device’s manufacturer.

So Which Should I Use? If you can get it, Thunderbolt-capable USB-C ports are going to be far more useful. The biggest advantage to Thunderbolt is bandwidth. Thunderbolt 3 supports a much higher theoretical bandwidth limit than USB 3.1 (40gbs vs 10gbs for USB), meaning you can connect more powerful and bandwidth-hungry devices to a Thunderbolt-capable port (external graphic cards, high-end monitors and docking stations, etc…). This really comes into play in graphical applications. For example, Thunderbolt-powered USB-C Ports can hook up to dual high-end 4K Monitors, or power three-HD (1080p) resolution monitors with the right laptop dock. It also gives priority to graphic traffic, which is great for docking stations. They also allow you to daisy-chain multiple devices off a single cable. Thunderbolt is also a full duplex protocol – meaning it can run 40gbs in both directions simultaneously.

This Dell Forum post sums up some more technical details on the two specs and why you’d use one over the other.

That all being said, Thunderbolt-capable devices and computers are generally more expensive. While it’s a very powerful standard, it’s also not as universal and prominent (and as cheap) as the USB standard, so it’s harder to find in many PCs.

For most uses, the USB 3.1 standard and the USB-C connection will suffice your needs just fine. It’s been around forever and is compatible with nearly everything. If you work in graphically-intense applications or have the need to connect a pair of 4K Monitors to your laptop (or three 1920×1080 monitors), make sure you get a system with Thunderbolt-capable USB-C ports and make sure everything in the chain is compatible and plugged in to the right place.