Use Vector Images in Office Apps For Higher Quality Documents

If you’ve done any sort of print or graphic design, you probably know that the higher resolution an image, the better it will look in print. Which is why good graphic designers will try to use vector-based images and graphics whenever possible in their designs. And that’s why you’ll occasionally see fuzzy images and graphics in print documents, because somebody didn’t use a high enough resolution image.

So what is a vector image? Vector images take resolution issues out of the equation. To quote Wikipedia, “Vector graphics are computer graphics images that are defined in terms of points on a Cartesian plane, which are connected by lines and curves to form polygons and other shapes.” Basically, it’s a bunch of fancy math and formulas used to create the graphic. Vector graphics have the advantage over your standard raster or bitmap graphics (like JPG or PNG images) in that they be scaled larger or smaller to any resolution or size without losing quality. See this example of the difference below: 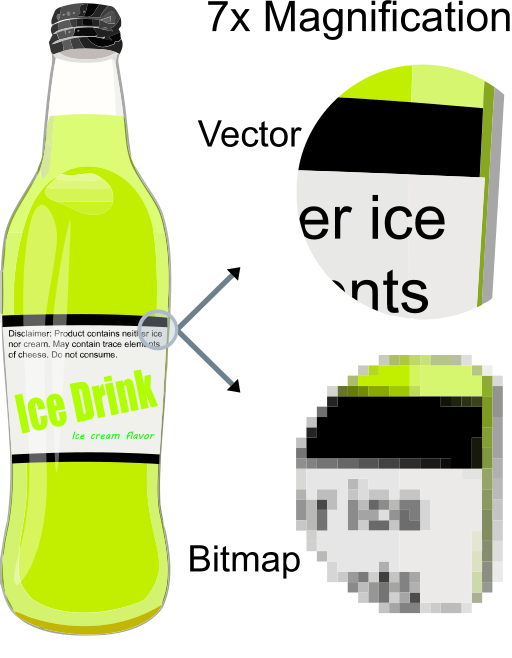 Vector-based graphics are easy-to-use in programs that are built for that sort of thing, like InDesign, Illustrator, Photoshop, Acrobat, etc… . The problem is that Microsoft’s Office programs have had limited support for vector-based graphics, which meant you could never really do truly decent desktop publishing work in there.

There are several image formats that can be potentially vector-based (I say potentially, as some of these can contain both vector and raster data): EPS, PS, PDF, AI, SVG and others. Office used to support the WMF and EMF formats, but that support (and that file format) went unsupported a while ago. Now Microsoft is (thankfully) heavily embracing the SVG format, which is an open and very compatible format. The collection of icons in MS Word and many of the images in the new premium content library are all SVG based and other SVG-based shapes in Office can be edited using the built-in tools (Office Watch looks at this further with some simple examples).

The one major issue was that if you copied a SVG-based graphic or image from Office and tried to paste it elsewhere, it would paste as a just a standard raster graphic – which loses all the advantages of having a vector-based graphic. Microsoft is working to better support the format and is now copying the file in its native format for use in other programs.

Inserting a vector image into a Word document is the same as inserting any graphic: Head up to the “Insert” menu and select “Pictures” and browse to your SVG file. If you need your logo in an SVG format, ask your designer for a copy (Adobe Illustrator can export vector PDFs and Illustrator files to SVG fairly easily and your designer probably has a copy of that sitting around if you don’t).